Details on Helmets -From the Azuchi-Momoyama Period-

From the early hoshi kabuto (riveted helmet) to the later suji kabuto (plated helmet), the helmets consisted of a hachi (bowl) and a shikoro (neck guard). The shikoro was a plate of layered scales that was hung from the back of the helmet’s bowl to protect the back of the neck. The neck guard of the hoshi kabuto was lightly folded back on the left and right sides, with patterned leather on the front. A lame was used to protect the face when firing from horseback. With the suji kabuto, an umbrella-rim neck guard with a broadly opened hem was mainly used, helping to prevent the warrior’s arms from being hindered while in close sword battle. 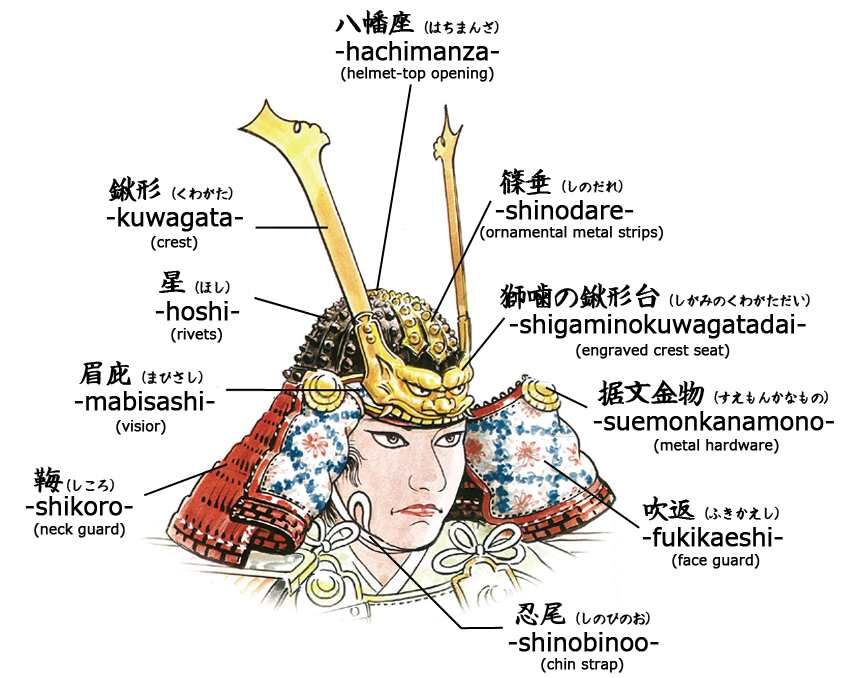 Helmets Evolving with the Times

The signs and decorations attached to a helmet are called tatemono. They are most commonly attached to the front of the helmet, in which case they are called maedate. One example of this is a kuwagata crest. Kuwa means “hoe,” but it is said that it originated as a deformation of deer antlers.

Hoshi Kabuto of the Heian Period (Left)
The heads of the rivets securing the trapezoid plates are shaped like a chinquapin tree and look powerful, characteristics that are said to have given rise to the name hoshi kabuto (star helmet).

Hoshi Kabuto of the Kamakura Period (Right)
With the kuwagata crest attached to the front, many of these helmets were created as a symbol of the warlord, displaying his dignity and bravery.

Hoshi Kabuto of the Muromachi Period (Left)
The plates that are joined together to form the bowl are secured flat. This helmet was worn in place of heavy hoshi kabuto, which also took time to build.

Helmets of the Late Muromachi Period (Right)
Beginning in the Northern and Southern Dynasties Period, instability of the social order led to lower classes rebelling against the upper classes, and the kuwagata crest gradually became commonplace. A variety of tatemono were used.