Details on the O-yoroi -From the Heian Period-

Along with the rise of the warrior class, the opening of the Heian Period was the stage for Japan’s unique development of both the practicality and design of the fine primary armor worn by the samurai, embodied in O-yoroi armor. Because the main form of battle was mounted archery, a variety of innovations were made to provide stability while in the saddle and at the same time allow the warrior to move freely on horseback. These included such things as a heavy plate skirt, a large visor hanging down to cover the face, and other measures to accommodate archery. Subsequently, as the form of battle changed, warriors switched from the heavy O-yoroi armor to the light domaru armor, and further improvements were made. 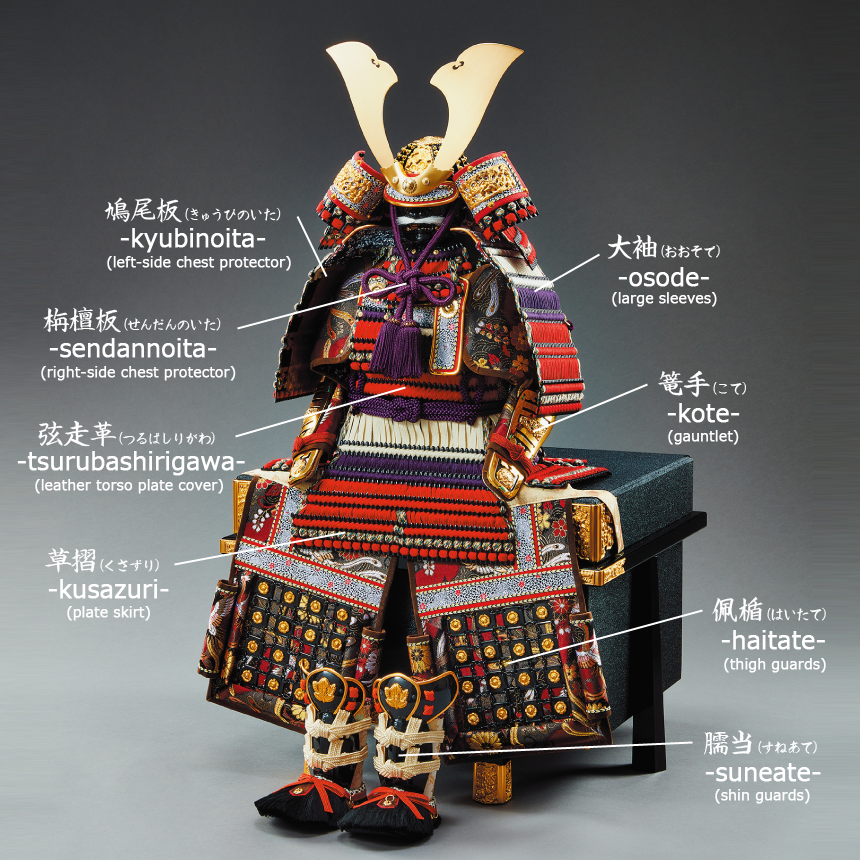 Kote（gauntlet）
Early samurai would only use kote on the left arm, which held the bow. In the late Kamakura Period, polearms,etc.,come into mainstream use, bringing about the advent of kote on doth arms.

Osode（large sleeves）
The sleeves on O-yoroi aer all large sleeves. Ordinarily, the sleeves were left attached to the armor. In preparation for mounted archery battle, these were attached to replace handheld shields. It was strong enough to prevent arrows from passing through.

Kyubi-no-ita（left-side chest protector）
A metal plate attached mainly to O-yoroi to protect the left side of the chest. Kyubi, meaning “pigeon tail,” refers to the resemblance to the shape of a pigeon’s tail.

Sendan-no-ita(right-side chest protector)
This was paired with the kyubi-no-ita, and was hung from the right side of the chest. It could be freely bent and stretched, allowing the right arm to move smoothly.

Tsurubashirigawa(leather torso plate cover)
A leather panel was attached to the front of the torso plate to prevent the arrow from snagging on the scales of the armor.

Kusazuri(plate skirt)
Four plates were hung from the armor in front and back, and on the left and right sides, to serve as a shield protecting the waist while on horseback.

Haitate(thigh guards)
Protected the warrior’s thighs while on horseback, along with maintaining stability of his body when firing. With O-yoroi armor in particular, the thin guards were large and heavy. In later generations, battles on foot become the most common, and thigh guards were made more compact to ensure mobility on the ground.

Details on Haramaki/Domaru Armor -From the Kamakura Period-

Unlike the large O-yoroi that was designed for warriors on horseback, this more compact armor was for warriors on the march, utilizing segmented tassets to allow them to be light on their feet. There were two styles. One style was hung from the chest to the abdomen, covering only the front. The other style extended it to the back and gathered it together in the center of the back. Suji kabuto helmets were used as necessary. As Japan entered the 14th century, the form of battle changed to mountain warfare, which was difficult for mounted warriors, and weaponry transitioned to forged items, such as swords and polearms. Accordingly, warlords also switched from the heavy O-yoroi armor to the light domaru armor, and further improvements were made.

In 1543, Portuguese ships brought firearms to the island of Tanegashima, forever changing the form of battle. Along with providing the most complete protection possible, it was necessary to allow warriors to be light and agile. This led to the development of a new type of armor called Tosei-gusoku. Strong materials were considered for armor, and helmet facepieces that could deflect bullets, etc., were also produced. Since the time of the Battle of Sekigahara, armor has typically been used only for occasional military reviews. However, the magnificence and elegance of Japanese armor, created by the people of those earlier times who pursued both functionality and beauty, cannot be found in the armor of any other country.